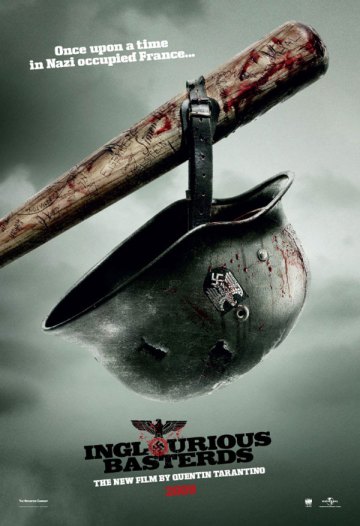 Quentin Tarantino is the director I wanna be someday. I can truly think of no one who can take a heavy drama… bash some heads in all while providing some unexpected laughs. Pulp Fiction, my favorite film by him, does that is such a flawless fashion… there’s no surprise he won an Oscar for “Best Original Screenplay” that year.

Because is there a sign that says, “Dead Nigger Storage”?

However, it’s his damn second best film. No one does dialogue quite like this man can.

Those of you who were expecting a straight up action movie, you are so retarded. This was more of a drama filled with gut wrenching violence served on a silver platter.

The story jumps around though a number of characters making their way to a cinema to murder Hitler and other high Nazi officers. But that’s really all I’m gonna tell you about the plot. It’s so fucking good, I don’t want to spoil a thing.

Still bloody, still twisted. Quentin Tarantino does it yet again. I’m expected the general public isn’t going to like this. They were expecting more violence. But I need my scalps… we’re in the killin Nazi business sirs and ma’ams. Go buy a fucking ticket before I call out The Bear Jew.