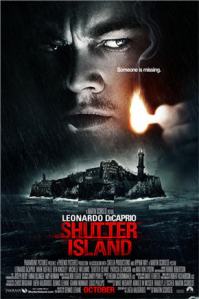 I decided to go see this on a whim last weekend with my girlfriend. I had been wanting to see this since it’s original release date in October, but Paramount delayed to February blaming the economy.

Walking to the theater I heard a few people talking about how much they liked it. Granted these were probably people that were furious The Hangover didn’t walk away from the Oscars with Best Picture, but it was still a dwindle of hope from what I thought this movie could end up being.

The movie starts with “Teddy’s” head in the sink on a ship on the way to Shutter Island. You meet his partner “Chuck.” The two U.S. Marshals are on their way to a mental institution where a very dangerous patient has apparently escaped. When they arrive they are greeted by Dr. Cawley. Chuck and Teddy are given a tour of the island as well as the ground rules. Cawley leaves the men with very little to work with, and refuses to release the personal files of his patents.

We also find out in the movie that Teddy has a past. His wife died along with four others in an apartment fire started by a maintenance man at the complex. Teddy has several dreams about her, and many flashbacks to his time served in WWII where he and the rest of his infantry division captured a Nazi death camp.

As the story continues, Teddy and Chuck think they are uncovering some sort of conspiracy on Shutter Island. With Dr. Cawley’s unwillingness to give out information they decided to do a little bit of their own digging. Teddy constantly remains curious about a lighthouse on the island. It’s heavily guarded with armed men and barbed wire. This is where he thinks secret brain surgeries/tests are being conducted. Teddy decides to make a run for the lighthouse, taking out a guard and stealing a gun in the process. He charges up the stairs, and when he takes down the final door… it really comes full circle.

They did a really great job of keeping the audience side tracked without any room to think what is really going on.

I just really hated his tie.
B+