This blog is for you. For you to learn why video games are art!

I can agree with you in some ways though Roger (do you mind if I call you Roger?) I’ve seen my fair share of video games that can not be classified as art in any way. 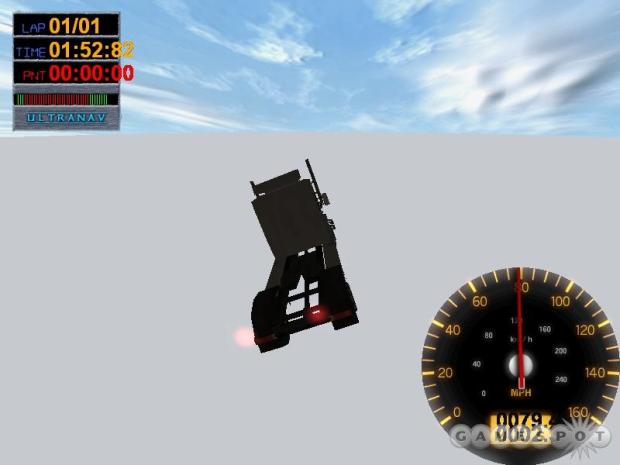 I mean the game to the right (Big Rigs: Over the Road Racing – 2004 for PC) has been rated the worst game of all time. I mean look at that! The numbers don’t fit in the boxes, the truck has no color, and the terrain doesn’t have much going for it either. Honestly, who in their right mind would waste their creative ability on making such a worthless pile of crap? Let alone expect a poor helpless soul to waste hours of their breathing while playing this pile of crap. These are things that probably make you look and say, “Wow, video games aren’t art! Maybe some can be, but if they all can’t, then there is no way they can be considered an art form!”

Well can’t the same be said for your preferred art source Roger? (Really, is it okay if call you Roger?) Take this hunk of junk movie for example, “Epic Movie.” I searched all over your site for a review but came up with nothing. Was it not worthy of your standards?

I mean this movie was god awful! But is it so bad that it isn’t art? I mean I’m not going to say that this movie should not be classified as an art form, but let’s be honest here, where the f**k is the “art” in this movie? If you’ve ever watched this (which I’m guessing you haven’t, because I had to be lured into a living room containing a pizza box and an attractive girlfriend to begin my viewing of this masterpiece) you too will have feelings of despair, anger, and disgust (similar to your thoughts on Kick-Ass) and probably demand the last 90 minutes of your life back.

But according to you Roger, Film is art. So there for Epic Movie is art. It’s good art as a matter of fact. As long as it’s not a video game, It can be art!

Roger, video games are animation. Animation unlike that of Disney/Pixar or Dreamworks. This is animation that has to be able to react to millions, maybe even billions of possible movements you as the player can make. Take a look at this game for example. (Not like I expect you to watch the video below, but it’s always worth a shot.)

God of War III is one of the most graphically stunning games. Don’t even give me that “it looks so gory and repulsive” garbage, because you’ve enjoyed plenty of movies with just as much as this game. The critic uses the phrase “film like sequences.” Did you hear that Roger? He compared a video game to your beloved art form of film! What a disgrace!

I’ve felt more emotional during video games than movies Roger. You control the story in a video game, you are the main character, and you need to finish the story. You can only watch and wish you could do that while watching a movie. Video games make that dream come true.