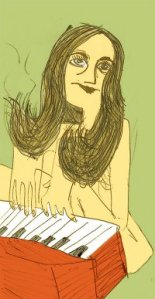 Anyway, Hanna Sköld and the rest of those bad-asses at Tangram Film have a new  multi-platform project, Granny’s Dancing on the Table. An odd name, but there’s nothing pedestrian and a lot odd here.

Here’s the synopsis from the ever-so fancy item known as a Facebook page.

Her name is Eini. Eini grows up isolated in the deep Swedish forests, and during her isolation she has developed a special kind of sensitivity and a very secret gift; the power to predict earthquakes. Now there are forces who wants’ to find her to prevent a catastrophe.

But Eini´s ability is both a gift and a curse; she’s aware of everything that goes on around her, but at the same time she’s totally unaware of her own feelings. To find true relations, Eini has to learn to let go of control, and discover her own vulnerability.

But day by day, the catastrophe comes closer. Maybe it’s time for you and me to do something…
Okay, I think we can safely say you haven’t seen anything like that before. But it gets better. If you hit the facebook page, you’ll see many philosophical questions being asked and most of them answered. This is part of the filmmaking process. It’s going to mold the script as it gets closer to completion.

But oh, it gets even better. But I don’t wanna fuck up explaining it so I’ll just show you the Power to the Pixel winning presentation.

Here it is if the embedded video below is being a jerk.

Now class, that’s how you make a presentation your bitch. It’s not exactly going to be JUST a movie, but will be spread around various media platforms. Games being one of them.

Speaking of which, I know I’m not the only one who smiled at the very mention of Heavy Rain. I don’t think I’ve heard those words come out of ANYONE’S mouth since that game came out. The idea of controlling the story through simple actions  (like Mass Effect, or Fallout) is only once piece of the puzzle.

I’d go on explaining… but I think I’ve fucked it up enough for one night. It’s midnight and I’m tired.

And I’m a guy who doesn’t like a lot of things. But whenever I see something I know I’ll love, I support the living fuck out of it. Simple as that. Support these fine guys and gals. Their shit don’t stink. It’s like a newborn baby’s poop… okay, it’s too late for metaphors.

Good luck to the whole Granny team. I’ll be looking for those Granny dollars.