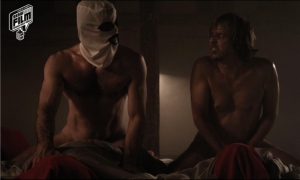 I’m not the biggest horror fan… SAW doesn’t really do it for me. Months ago I heard about A Serbian Film.

Very odd yet generic name. I heard it getting a lot of buzz back at SXSW.

I was wrong, oh so very wrong.

The next series of events include, but are not limited to…

*Beating on women and ejaculating on their faces

*Having your teeth pulled out of your head and have a dude shove his twigs and berries in your mouth, choking you to death.

*Fucking women and chopping their heads off… then continuing to fuck them.

*Stabbing someone in the eye with your erect penis and killing them.

As you can see, this movie requires a strong constitution to make it through. It’s many kinds of messed up. But it succeeds at doing what horror movies are meant to do… disturb. And that it does. Tenfold.

This is a movie everyone should see… once… and only once. If you’re coming back for second helpings, you need to be in a mental hospital or put down. That said, this is one of my favorites of the year. Find a torrent. I’m sure even the NC-17 version will be cut down when it comes to the states officially next month.

Sick sick sick, but so good.