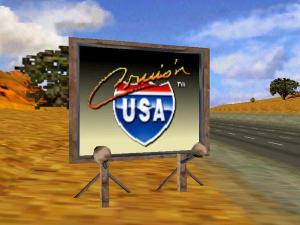 We’ve had many great years together since I first saw you about 16 years ago in Wal-Mart.

Yes, Wal-Mart had a Crusin’ USA machine. Why? I dunno.

I instantly fell in love with your beautiful textures… and it’s one of the few games to actually feature Chicago driving the way it truly is… 140MPH with cars bouncing off of each other. I love the Dan Ryan and the Ike. And don’t forget those GODDAMN EL-TRACKS! 99% of the time. It’s not your fault for crashing and losing the race here. Some jackass just runs into some shit and runs into you. 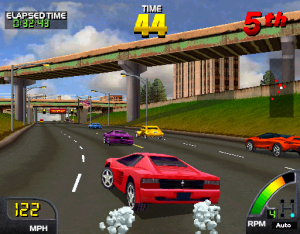 And geez, when you came out on Nintendo 64 the next year, SPLIT SCREEN? GET THE FUCK OUTA HERE? It was amazing, and none of that flat Mode 7 bullshit either (I have ❤ for Mode 7 ya’ll, F-Zero 4 Life)

But now, I’m 16 years older and wiser. We met again recent and I played through the courses again. I felt the same sinful pleasures I didn’t think were so sinful when I was eight.

I found myself saying that for the first time outside of Xbox Live.

Anyway, as I continued to play… I noticed you’ve been aging. Your once vibrant forest was now quite 2 dimensional, like all N64 trees. Also, the lack of N64 penguin made me a sadddddddddd panda.

And I swear the Cruise the USA mode is on some sort of PMS. It kicks you into one of the hardest courses as the 2nd damn level. The hell? You games on your devilish tricks.

Turns me on a bit.

What doesn’t is the fact to traffic will randomly find you and get in your way if you’re doing too well. The good ol’ Midway rubber band.

You are a liar and a cheater Crusin’ USA.

Every time I get close to that GGA record. SO damn close. Here comes that STUPID BLUE CAR. 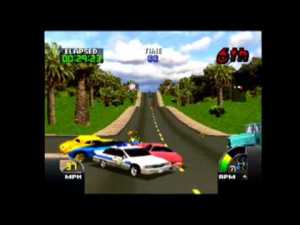 The result of that one damn blue car

It’s really a mess all around.

But I kinda like it that way. There’s a sexiness to your flaws. A method to your madness. I see the way you play your game.

So when we going out again?

That GGA is mine you hear. Just gotta shave a quarter(?) second off.

So in closing. I love you, I hate you. In fact, I think only a band as shitty as Nickelback can explain that. With much love, Wolfen.

I’ll end this semi awkward love letter by displaying the very feeling of awkwardness I get in the presence of Crusin’ USA.