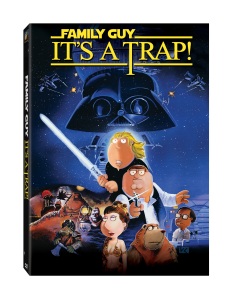 We all remember when “Blue Harvest” came out about two years ago… it was hailed as the best Star Wars parody since “Spaceballs”… I of course wouldn’t even put those two on the same street. Mel Brooks is a genius and Mr. McPharlane is… well not.

Anyway, because Fox demanded it… Family Guy is ending their three part Star Wars joke. But dare I say, I laughed quite a bit. What you’ll be treated to is the greatest opening Star Wars sequence ever. Trust me on this.

The rest is all you’d pretty much expect. I didn’t like the American Dad cameos… mostly because I find American Dad pretty unfunny. But the rest of it, including another Conway Twitty joke… bunch of recycled day to day Family Guy shit… that’s not always a problem, but some of it just seems a little too random even for Family Guy. The ending also just seemed like filler and little else. Same with sarlac pit scene.

When all is said and done, it’s just another episode of Family Guy with extra filler. Like it or hate it. That’s what it is.

Where’s my Back to the Future?