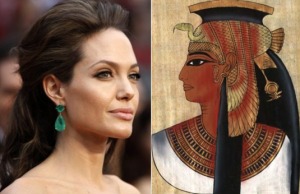 I’ve discussed this with people a number of times. So I’ll keep it brief. I’m tired as fuck.

Angelina Jolie and all her hotness will be playing the doomed queen. This is nice and all… her being hot and stuff. Cleopatra was apparently quite the fox according to writings. But as you can see on the picture to the right, she was far from pale. And even though she was Greek… she wouldn’t be pale as snow. She would have at least been a little dark from her environment. But oh well. It’s not a total loss I suppose.

The continues a pattern in Hollywood. I’m pretty sure the ancient Egyptians were black. At least that’s what their art tells us. But time after time, we have these roles filled by the whitest person on the planet.

Sup Prince of Persia? Not a black role, but you get the idea.

Maybe I’m just bitching. But I wouldn’t bitch so much if this new Cleopatra movie wasn’t going to be PG-13.  No tits? Fuck that shit.

And Hollywood, there are plenty of decent actors who look like they don’t need 7 coats of sunblock to live in the warm climates.

Oh well, back to work on the movie then. Just had to let that out.