Hey, sup Poland? I’m a big fan of your sausages and your ability to be conquered by Hitler. But had no idea there was a strong adult animation scene. Apparently there is.

Apparently, this hedghog dude has had a long running comic in Poland, and comes in kid friendly and adult versions. This one is clearly the later. 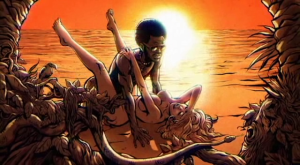 The film focuses on George, a lusty, binge drinking  hedgehog who’s dating a married woman with a bitch-ass husband. Things are going quite well until two Neo Nazi friends decide to beat him up.

Not to give too much away, but George ends up getting cloned. Though the clone is far from perfect, it hits the town and causes a VERY special kind of havoc. VERY.

The animation style is flash… I’m not 100% on that, maybe someone can help me out there. But I love the way it turned out. Plenty of depth, and you can definitely see a couple of nods to some certain anime… and one of the best animated fight sequences I’ve seen in years.

Well this get a wide release. I’d have to say no. But I’ve been wrong before. An english dub would be interesting though.

All and all, it was a refreshing animated experience after all the Dreamworks and Pixar I’ve been watching as of late. If sex, drugs, drinking, blood, and puke are your thing… then this isn’t one to be missed.