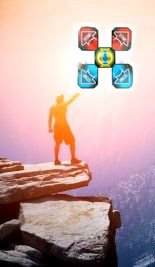 Nuke-Con is over and it’s time to chalk up another con been to and screened at. Let’s all have a moment of silence for all of the uncool people that haven’t seen DDR: The Warrior’s Path yet.

Okay, but now it’s time to continue moving forward. We may be hitting another con or two before things really start to get real. I’ve been checking out audience feedback. Just seeing what works and what doesn’t. It’s pretty fun that way.

A Hint of Cherry is the next film, but with that just awaiting funding… we need to keep busy.

That’s why it’s time to start talking about Pump it Up: The Warrior’s Path.

This will be the conclusion to the “Serious Business Saga”.

Most of the original cast will be back… but mostly in cameos and what not. I like to keep the blood fresh on these projects.

I’m in the process of writing the script now as I confirm who will actually be returning… besides myself.

What I can say right now is we’ll be seeing the deaths of a few returning characters… in a bloody fashion I might add. And we’ll see Yvette reach her true potential.

Casting has begun once more.

After this film is done. We will hit the festival on con circuit much harder than we have. The first and second films will be combined into a double feature. Complete with all kinds of fun things in between the movies. Crazy shit’s gonna go down I can assure you.