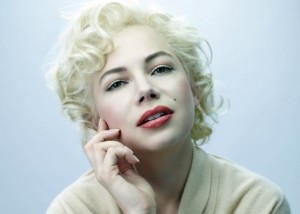 I had my doubts about Michelle Williams playing Ms. Monroe.

I hope she will accept my apology for my dumbassness.

It follows the memoirs of a then your Colin Clark and the short time he spent getting to know Ms. Monroe… learning about her childhood as well as her strange habits and drug abuse as they worked on Laurence Oliver’s “The Prince and the Showgirl.”

There’s truly never a dull moment here, start to finish. We’re given an intimate look at every moment of Marilyn’s day, her handlers. etc. We also see a young Colin Clark being totally starstruck at all times, because… well, who wouldn’t be?

It can be hard to film with a difficult actor. But I have a lot more respect for directors after seeing some of what I saw. We were getting towards David Fincher numbers with the amount of takes (note: That’s A lot).

The film ends on a very somber, but very happy note. Which you normally don’t see from big biopics such as this. I guess that’s what makes it so special to me.

The Oscar race has started. And if this is any indecation on how this season’s gonna go… it’s gonna be a fun one.