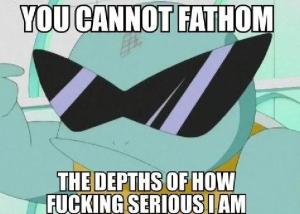 Okay, as everyone who’s ever worked on a movie or something like it knows… it’s not always beds of roses with sunshine and butterflies. It’s where professionals get down to the nitty-gritty and do whatever it takes to create the best product they can. Pump it Up: The Warrior’s Path is no different in that respect. I hand-picked each and every member of the cast. I tailor the characters to the actor to reach that maximum awesome. That’s just how I roll.

I’m also one of the nicest directors you’re going to run into out there. True story.

As the title of the article suggests, I’ve been kicked in the dick pretty hard by an actor who shall remain nameless. We’ll just call them Bobby. I spent a great deal of time talking to Bobby and breaking down the script to him. He seemed quite excited at the time and pretty pumped (no pun intended) to be part of a pretty unique production. This of course makes me as the director and producer pretty damn excited as well. A professional thinking what I’M doing is cool? Fuck yes.

I even went into the city to meet Bobby and just take in a film with them, see what makes them tick. As I talked to Bobby though, things started to unravel a little bit. Apparently his morals conflicted with the character a little bit. This movie is full of fucking assholes. I don’t think you’re supposed to feel morally attached to them. Just sayin’. But, being a professional actor… you would think this guy would just do what I’m going to pay them to do and just play the role of this character?

Hi Joseph!
I read the entire script and had a couple of notes:
I, as an actress (and writer), try creating characters that don’t swear or fornicate (I mean actual penetration) on camera–although these things can always be alluded to. I just think it would sound like Emma was a real psychiatrist if she spoke properly and didn’t curse, don’t you?

This is where I, or many other writer/directors might take offense. You read the script. You know the tone. And I’m not asking anyone to be penetrated on camera either. Don’t know where that came from . But Bobby shouldn’t be filling my head with these ideas. I’m not going to make a character squeaky clean because it makes a person uncomfortable. I thought acting was about being someone you’re not? Shoot me if I’m incorrect.

But here comes me… giving folks the benefit of the doubt. Thinking she’ll warm up to the cast and crew. We’re actually a pretty tight bunch. Even our dearest Claire was a bit cold in the beginning, but warmed up to us.

Bobby: I believe it.
Hey…tell those guys…if they happen to be speaking of MY titty meat–that I don’t know them quite well enough for a joke like that. Although I do get the strawberry reference!\
sexywolfen: Of course. Bacon and strawberries. There we go.
Bobby: Bacon??
sexywolfen: Guys like bacon. Everyone likes bacon
Bobby: Yes, I know I do.
sexywolfen: You’ll adjust to all this I’m sure.
Bobby: I dunno.
sexywolfen: You will, everyone’s pretty great.
Bobby: They seem like it…just a bit vulgar for me. Sometimes..
sexywolfen: Vulgar yes, but they mean well
Bobby: Okay! Okey-dokey.
sexywolfen: Just trying to drag you down a level to where we are lol
Bobby: Hm. That’s not very likely to work, but I get your sense of humor. It’s good that you want me to be one of y’all.
sexywolfen: Just trying to create the best environment before you get jarred with all this at once.
Bobby: It would be nice if I could meet with someone at least three times in person before the strange jokes begin..?? Have a good night!

Okay, yeah. I’m starting to get the idea that Bobby had no idea what he was getting his bubbly ass into. It makes me wonder if the script was actually read. It’s really looking like it wasn’t. If that’s the case, I’ve been being lied to. That’s not okay. It’s shitty. You shouldn’t do things like this to people.

Here’s the kicker. I got this message while I was taking a break with some NBA Jam.

Hey, Hey, Hey!  It was nice meeting you the other day.  I’m very sorry, but I won’t be able to be in “Pump it up.”, I’ve got too much going on!  I know that you will be a great director and maybe we’ll meet on another set again one day very soon!  Cheers, and good luck filming!  🙂

I’m glad there was a smiley at the end of that or I’d be pretty fucking pissed /sarcasm.  Sorry, doubt we’ll meet up again. I sold you as such a wonderful professional to everybody and then you just turn your back on me and fart in my face. Everyone else thought you were pretty cool too. Maybe I should have known better, but I like to give anyone a chance who wants to work for me. They just need to act like decent human beings. When I read this message. All I could see was, “Fuck you”. Maybe I’m being melodramatic, but that’s the way I felt. When I have the chance to hash out a character with someone, I try to make it fit them. But to completely flip the demeanor of a character, fuck that shit. Doubt we’ll be meeting another film set man.

You want to be a professional? Fucking act like one. Now… I need to get back to my filthy little script. Thankfully I have a full backlog of replacements. Stupid me.

If I was a worse person, I’d use their actual name. Don’t wanna ruin them though. Maybe they’ll get a clue.