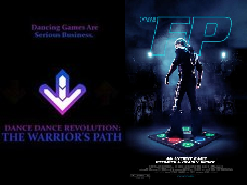 Okay, it’s been a long time coming, but I finally saw The FP last night with a rather large group of DDR players.

First of all. Shoutouts are needed. Thanks to Brian Ho and the Indy folk that traveled so fucking far to get their Beat Beat Revelation on with us. Shoutouts also to the fat old white man who fell asleep during the movie and was snoring, even over our hoots and hollers.

I don’t think I need to explain to you all what exactly The FP is by now, but in case you were living under same kind of a rock, here’s a trailer. I’ll wait.

Yeah, that’s it in all it’s glory. Awesome right?

People wonder how these two go against one another and if they’re really the same movie.

Here’s the answer. They really don’t. These are two very different movies with lots to say.

DDR: TWP plays like a drama, until people start talking. It’s set in the real would and has real world limitations (most of which are budget wise) but somehow I made it work. It has it’s own set of rules. FP hits as a satire right from the get go and has not real established rules. It’s not tied down by lame things like reality. Over the top dialogue sentence after sentence. Not to mention the best ending in recent cinematic history.

DDR: TWP is Internet: The Movie.

Both of which deserve your hard earned money. I just wish there was more of it to enjoy. Both movies are short.

That being said, I would love to see a Warrior’s Path/FP crossover of some sort. Many laughs would be had. But I also would like a pony. You niggas hook me up with a fucking pony!

I’ll be pick up a Blu-Ray of The FP whenever that mess happens. Maybe we’ll have a contest here for DDR/FP double pack. Who knows?

Pump it Up: The Warrior’s Path is ready for filming by the way. We gonna get in there.